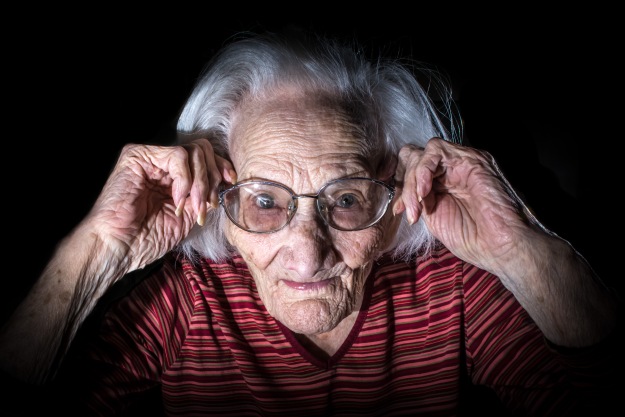 My brother and I were talking about the the blog post I wrote the other day regarding Grandma not being able to find her glasses. He reminded me of the following story, which we both thought would be a good companion post:

A few weeks after Grandma first moved here I had to go to Chicago for business so my brother Brandon came to town to stay with her.  When I returned we had a couple of days to hang out before he went home.

His last night in town we did something rare for us; we went bar-hopping. It started with dinner out. Then a drink at the house. Then a friend called and there was Karaoke. Annnd…something else. And then Martinis. Some other stuff in the middle there. I’m not sure…What are you looking at? Don’t judge…

It was truly an epic night of brotherly inebriation.

The next morning came all too early.  And all too bright.  I got up, pronounced myself too hung over to function and promptly went and laid back down in bed.  I stayed there most of the rest of the day.  At one point during the morning Brandon came in and asked me if I’d seen his glasses.  He was sure he hadn’t left them anywhere, but he’d looked through all of his things and couldn’t locate them.

He was genuinely confused about what had happened to his glasses.  It’s not like they were sunglasses that you might take off when you go inside, then forget when you leave the bar because it’s no longer light outside (not that I’ve ever DONE that, mind you).  These were the eyeglasses that he needed in order to see.  He didn’t think he was so drunk that he would have failed to notice that he couldn’t see…but then…where were his glasses?

As the day progressed I could hear Brandon pacing through the house…searching and re-searching his things in case he overlooked something.  I heard him calling each of the bars, one by one, as they opened.  The first of the bars opened at noon, so the first disappointing phone call happened at around 12:05:

“Hi, did you find any eyeglasses that may have been left there last night?  No?  Can I leave my number in case you find them?  Thanks”.  Repeat.  It all ended sadly with a disappointing “No, sorry” when the last bar opened at 5:00.

Brandon was bummed out to say the least. He is a writer by trade, who was in the midst of edits for publication of his first novel (check out the link at the bottom of the page!), so being able to see clearly is a necessity. Also, he was leaving for home that night, and he lives on the tiny island of Molokai in Hawaii. The island isn’t exactly teaming with places to buy eyewear, so losing his glasses was indeed a hardship.

By the end of the day, Brandon had pretty well resolved himself to the idea that he was going to have to endure the expense of both time and money to buy a new pair of glasses. As the time to go to the airport approached, Brandon went in to Grandma’s room to say goodbye to her. When he did he saw his glasses sitting on Grandma’s bedside table.

Since she hadn’t been out carousing the night before she had apparently gotten up before we did. Seeing his glasses sitting on the table and thinking they were hers, she promptly picked them up and put them where they “belong”.

Brandon came out of the room with his glasses held triumphantly in his hands and we had a good laugh about the angst and self-doubt that Grandma caused by “stealing” his glasses. On more recent visits, Brandon has made sure to keep his glasses safely hidden out of sight at night, lest Grandma should take them again. He’s wise, too…because if she does the same thing now, she’ll most likely lose them the way she loses her own…then he won’t be able to find his eyes either…

SHAMELESS PLUG ALERT!!! Brandon’s debut novel “All Woman and Springtime” was released in May 2012 by Algonquin and is just being released in paperback this month.