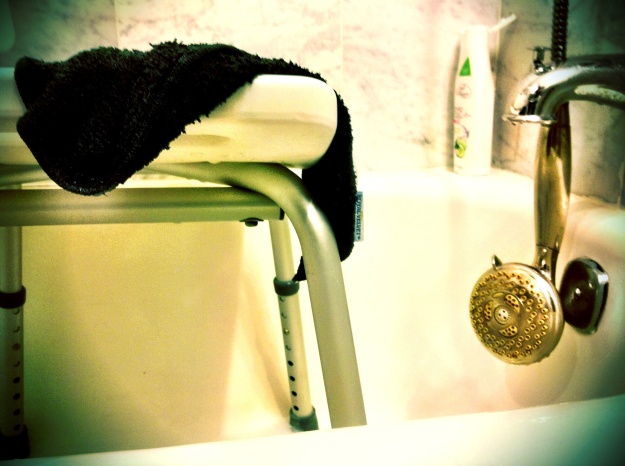 Bath time is a stressful time for seniors.

The past few days, Grandma has had some stomach upset, which has caused her to have to rush to the bathroom a few times a day.

A few months…even a few weeks ago, she would have been able to make it to the bathroom in time with no trouble.  Now, though, when the need strikes, she’s got to wrestle with getting upright, then get herself to the bathroom as quickly as is safely possible.

Last Saturday, in the afternoon, she got up hurriedly and at least made it into the bathroom.  She made a mess, but (bless her aged heart) she did her best to clean it up.  I’ll spare the grisly details other than to say that I never thought I’d have the occasion to write the words “poop smear” in anything other than an attempt at humor.  I will assure you that it is not as funny as it sounds.

I knew something was up because of how relatively quickly she got off the couch and moved towards the bathroom.  The running water after she flushed confirmed that she was trying to clean up.  Exhausted from the effort, she then went back to her room and took a long nap while I tidied up the mess.

Later that night we had a repeat of the same scenario, only this time she didn’t quite make it to the bathroom.  When she was done she left her nightgown in a fetid pile on the floor and went into her room and attempted to go to bed.  On the bright side, the bathroom wasn’t a mess…her clothes needed to be rinsed and run through the washer on “sanitary”, but the room itself was clean.

However, I knew that I couldn’t let her go to sleep before she got herself cleaned up.

This has happened a couple of times before, but it’s always been on days when I had home health here.  Jackie’s really good at getting Grandma into the bath, and is able to help her wash.  After the bath she even rubs Grandma down with lotion and trims her nails for her.  Despite Grandma’s misgivings about bathing, I know she rather enjoys the pampering.

This was different though.  It was Saturday.  There was no one but me here to help.

All along my journey through being a caregiver I’ve had various thresholds I set for myself.  They are triggers of things I don’t think I’ll be able to deal with.   Funny thing is…at every turn I’ve found the inner strength to look past the artificial thresholds that I’ve set and simply do what needed to be done.

That night it took some cajoling, but I finally got Grandma to take a bath.   I know she didn’t want to get undressed in front of me, and she knew that she’d need help navigating the way into the tub.   I think she finally acquiesced because I laid out my plan for her as to how I was going to help her get into and out of the tub while preserving as much modesty as possible.  The reality, of course, was not as modest as  either of us would have preferred, but we got her into the bath, got her cleaned up, and got her safely back out and into bed without incident.

During the ordeal we joked as we often do.

“This is worse for me than it is for you, Grandma”

I thought about not posting this.  I thought that perhaps the subject matter might be too much for people.  Then, I remembered that one of my main goals in writing this blog is to give an honest look into what it truly means to be a caregiver. It’s not always fun and it’s never glamorous.  Sometimes it involves poop and bathing your grandmother.

In the end, though, you do what needs to be done because there’s no one else to do it.