It’s happened dozens of times.  Grandma and I will be sitting watching TV and out of nowhere she’ll say something random.  Sometimes it’s in relation to a show we’re watching on TV.  Sometimes she’s not paying attention to TV at all, but is drifting in that space between being asleep and awake.

The first time I heard her say something nonsequiter was a few years ago, after she moved in with my Mom.  I was home visiting and was staying in the loft above the living room.  Downstairs,  I heard Grandma  making a fire in the fireplace.  It was early and the house was cold.  I started getting up and heard her say it, plain as day.

I sat on the edge of the bed, shocked and saddened.  My brother and I had moved her in with Mom a few months previous, so my first thought was she was talking about her old apartment in Utah.  There was something about the way she said it, though. “I want to go hoooooome”.  More plea than anything.  To no one in particular.  It sounded so lonely and so…sad.

Now she says both “I want to go home” and “I want to die” more or less interchangeably.  It’s like a little snippet of prayer escaping her lips.  It used to really shake me, especially the way she says it, drawing out the vowels…These days, though, I just take it as an honest outward expression of what she wants.  She’s done.  She’s tired.  Nearly everyone she’s ever known has preceded her in death.

I get it.  She’s had a good, long life.  Now she mostly sleeps and sits in silence, one hearing aid in but turned off, the other missing but forgotten until she goes to get ready for bed.  Invariably, the other hearing aid is in the other room, where it’s been since she last got up from bed.  She has enough self-awareness still to be frustrated by the way her body and mind are abandoning her.

She sometimes says to me “It’s not fair that a young (HA!) man should have to take care of an old creature like me”.  I tell her that she’s overlooking the very real possibility that she might be taking care of me.  When I think of all the changes in my life the past couple of years I see just how true that is.

Her outward expressions of her inner voice aren’t all about death, however.  She’s very judgmental of people she sees on TV.  Sometimes it makes perfect sense.  She’ll burst out with “NO!  I don’t LIKE him/her!” and I’ll look to see that there is a tattooed biker or a woman with a short skirt or revealing outfit.  She comes from a different generation.

This is the woman for whom the Olympic gymnasts at last summer’s London games were too risque.  Every time the gymnasts (or swimmers…or runners or…athletes of any kind) were competing I’d hear “I think they’d be more comfortable if they put more clothes on”.  My brother and I started referring to the Olympic gymnasts as “gymnasties”.  Grandma didn’t find the humor in it, but we sure did.

Sometimes her outbursts make no sense at all.  She’ll say “I HATE him” and I’ll look at the TV and it will be a CPA on an H&R Block commercial and I’ll wonder what she’s got against CPAs…or maybe it’s just taxes?  More likely she’s half-awake and her mind has drifted to some long-ago memory involving someone she didn’t like or a traumatic event.  It’s hard to tell. 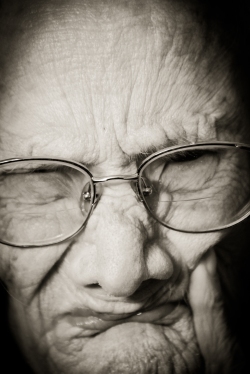 She pointed at the TV.  At Jeff Renner, the KING-5 weatherman.

Don’t take it personally, Jeff.  At least she’s not saying you’d be more comfortable with more clothes on.

Though, would it kill ya to bring us some sun?