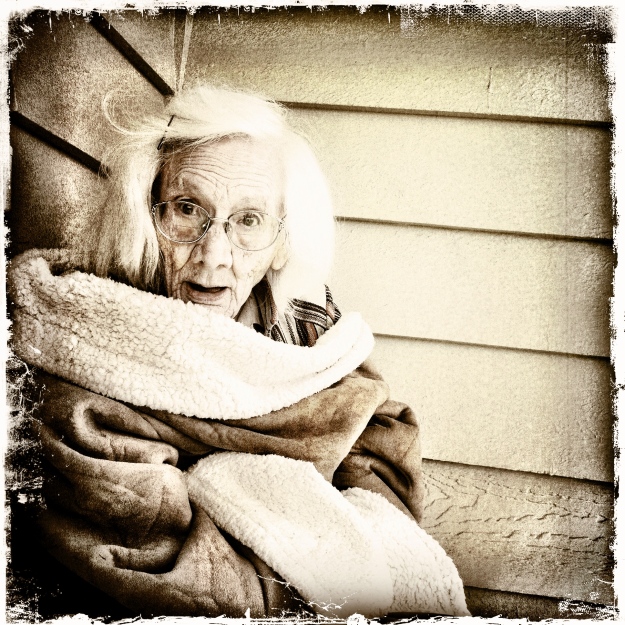 Grandma enjoys sitting on the front porch. And goofing for the camera.

When Grandma first moved in and was more mobile (and had less supervision pre-Home Health) I would often find the front door unlocked when I came home from work.  Clearly, she was going out on the front porch at some point during the day and failing to lock the door when she came back in. There is a chair with a nice cushion out there that she can sit on in nice weather.

I certainly don’t mind her going out on the porch, so long as she doesn’t wander any farther.  Lucky for me, there are two flights of stairs between the porch and the street, so she doesn’t go farther than the porch.  When we do go down the steps, she still does the stairs on her own.  Slowly.   And one at a time.  With me there for assistance in case she loses her balance.

It’s nice to know that if the house was on fire she could get out, but that the stairs are enough of a barrier that she doesn’t start wandering the neighborhood in her nightgown.

However, I do worry about her failing to lock the door.  Our neighborhood isn’t bad, but we live in the city, and with all the foot traffic going by I don’t want to be an easy target for thieves.  I tried talking to Grandma about remembering to lock the door when she comes back in the house, to no avail.

Finally, I left her this note: 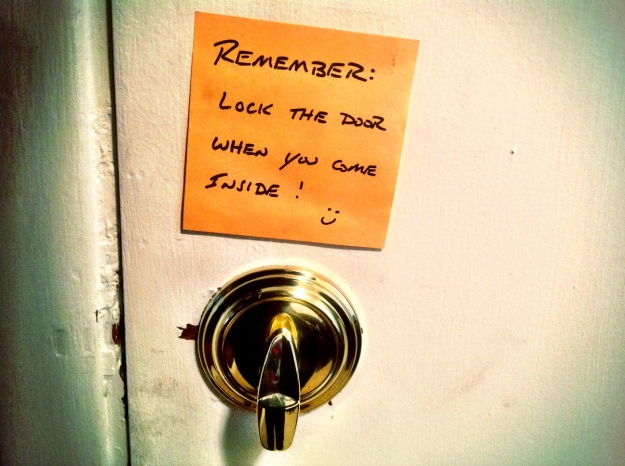 Sometimes simple visual reminders are all that are necessary.

That did the trick.  Ever since the day I left the note, the front door has always been locked when I get home.  Well…there was one day I came home and the front door was open a few inches.  But the deadbolt was in the “locked” position, so the door was technically locked…it was just locked before she closed it!  (I’ll take “99% of the time”…at least she’s trying…)

I always enjoy watching Grandma when she thinks she’s alone.  For one, it’s pretty amusing to see what she’s doing.  It’s also helpful, as her caregiver, to see her behavior when she doesn’t think anyone is around.

Yesterday afternoon when I got home from work I saw Grandma standing up next to the couch, staring out the window.  We live on a very busy street with tons of car and foot traffic going by constantly, so it sort of surprises me that she doesn’t spend more time observing the outside world.  It’s got to be better than whatever is on TV!

She spent a few minutes looking back and forth out the window.  I laughed to myself thinking about any people on the street who might happen to glance up at the house.  It must be a bit of a shock to look up at a house and see a frail, old, white-haired figure staring back at you.

Once Grandma had seen what she wanted to see, she started looking at the magazines on the end table next to the couch.  She then pulled out the end table and bent down to look behind it.  “What is she snooping for now?” I wondered.  She put the end table back and toddled back around the couch to sit down.

She sat back for a second…then leaned forward and rearranged the coffee table.  She’s usually pretty fidgety when she’s awake, so I was curious what she might be doing.  Then, she got up again and went around towards the window and pulled the end table out a second time.  It takes a lot of effort for Grandma to stand up, let alone to move an end table, so she was clearly looking for something.  I decided it was time to intervene.

“Hi Grandma, what are you looking for?”

Grandma’s glasses are the item that she misplaces most frequently.  Usually when she’s looking for them she’s sitting on the couch and they are on the nightstand next to her bed…or they’ll be out by the couch and she’ll be in bed.  Sometimes she leaves them on the side of the sink in the bathroom.  The point is, there are a finite number of places that she typically leaves them.  Behind the end table is not one of those places.

“What makes you think they are behind the end table?”

I walked into Grandma’s room and there they were, on the nightstand where they’d been all day.  I brought them out to her triumphantly, with my arms raised in victory.

Ever the independent old lady, Grandma responded as she took them from me: “There they are!  I knew I’d find ’em…”

It’s a good thing she doesn’t need me around to help her.